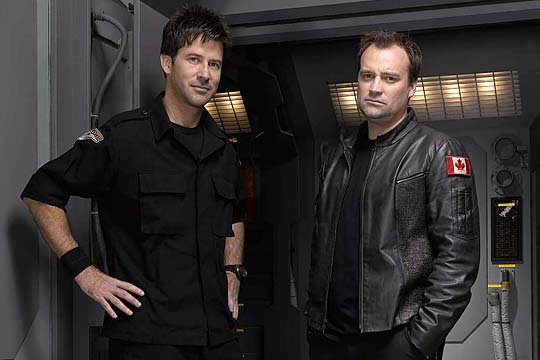 Missions since he had recovered from being a bug had been fucked up. John’s sense of the City, of the ATA carriers in his area had gotten used to the max. The Aurora had been overwhelming in the numbers of people pressing against him and when they had all died, he had felt as if something had been ripped away from him.

Rodney was and would always be the center of what he felt to be home. John was honest enough with himself to acknowledge that. But the crew of the Aurora had felt like family. It made his skin itch in a not quite comfortable way.

Finding and then losing Ford had shaken him. The thing that he had become, the Other that had been buried in the change in his genetics by Carson, had stirred briefly when they had stepped onto the Wraith ship. John had spent the whole time he was on the thing, fighting against it. He wasn’t that thing anymore. He had clung to his sense of Rodney with hard and greedy fingers and used it to keep his humanity.

John took a deep breath and bumped his shoulder against his lovers as they tramped through the woods on the latest planet they were visiting. His scientist smiled back at him and he felt the tension he was carrying relax slightly.

He turned his attention back to his internal upset and pushed his threat sense out. He needed to work out what was going on in his head. John had found that exercise cleared his head enough to let him think clearly, to push past the knots of his own emotional constipation. The Other, the thing he had transformed into was further away than it had been. The six months he had spent in the Sanctuary had been good for him on that front, even if he had missed Rodney like a missing limb.

“Stop thinking so hard, John,” Rodney muttered. “You’ve told me about keeping my head in the here and now often enough while we’re on a mission.”

John snorted at that. He had indeed made sure that Rodney knew to have his lead in the game when they were off world. He needed to practice what he had preached. “I’m good, Rodney. All here.”

And John was. The time for personal reflection was not then. He could use the techniques he had learned in sanctuary to clear his head later. Right then and there, he needed to be thinking about what was happening ahead of them.

“Rodney? It feels like a large mass of Ancient tech ahead,” John reported after several minutes’ walk.

John was proud of how his scientist reacted. Unlike himself or Teyla, Rodney didn’t carry a P-90, he just had a 9mil in a thigh holster. But he was carrying one of the two LSD’s along with the other tools of the scientist’s trade. So when Rodney pulled out his LSD and its earth made cousin, he was happy. He wouldn’t be happy if McKay reached for his gun before his tools.

“We have a large concentration of Ancient equipment, roughly three klicks ahead,” Rodney called quietly. “It’s very low on power. If I had to say, whatever’s powering it, is on the last ergs of power.”

Teyla padded up to peek over Rodney’s shoulder and he tilted the screen so she could see it. “Can this show how the power is distributed?”

John glanced back in time to see Rodney frown at his sensors before a smile broke over his face. “I think so.”

“How long do you think it will take you to work it out?” John asked. His hands moved in signs that he had worked out with Ronon and Teyla. Both nodded and started circling their position.

“Less time if you come over here and use your magic gene to push the LSD to do what I want it to do,” Rodney handed over his LSD and turned his attention to his earth equipment.

John flicked the little Ancient machine in his hand on and delved into its programming. He was able to change some things without a problem but the programming resisted his efforts to get it to trace out the power conduits. When he managed it, he locked the change in place.

“Here, Rodney. The changes are about as permeant as I can make them. It should let you map out the power flows and the structure it moves through. If you want it to do anything else, like what it was originally programed for, you just need to request it got back to the first configuration. To get it back to this one, ask the thing for configuration two,” John told him as he handed over the modified LSD.

”Excellent,” Rodney crowed as he moved the two scanners together. Both showed the wire outline of an Ancient outpost. “Whatever is being powered, it’s extensive.”

The LSD in his thigh pocket buzzed harshly, pulsing with the rhythm he had set for approaching life signs. John pulled it out and glanced at the display. “Fifteen unknowns approaching, no wraith. It looks like one of them has a weak expression of the ATA gene.”

Ronon and Teyla moved to stand just in front of and to the side of him and John let them. His time as a bug had given him a weak sense of Teyla, and he leaned hard on that feeling to mark her place in his head. If there was to be a battle, knowing where two of his three team mates were was a very important advantage.

Rodney was tapping at his LSD for a few moments before he dropped it into a thigh pocket. The earthborn scanner got a review and then was placed in the other pocket before the scientist moved to stand behind his right shoulder. “I have everything still scanning. We should be good.”

John nodded and slotted his sense of Rodney into the back of his head. He was as prepared as he was going to get. John took a deep breath and crossed his hands over the stock of his P-90. He couldn’t hide that he was armed but he could do his best not to look threatening.

The group that worked their way out of the woods towards them looked reasonably typical for Pegasus. Home spun, sturdy clothes with basic boots that wouldn’t be out of place anywhere. The man in the lead though, was dressed many levels better than his fellows.

John could see what looked like well-tailored leather trousers, fine cotton shirt and a west wider embroidery lining the chest edges. From the faint edge of familiar about the man, John was certain he was the ATA carrier they had detected.

He kept an eye on the men behind the leader even as he smiled at the whole group. Rodney had commented that his smile looked like it belonged in a male beauty contest. When pressed, his scientist had explained he looked like an empty headed doll when he smiled that way.

John really didn’t care. He had tried other ways to smile and had been told he looked either like a serial killer or a used car sales man. If looking like an empty headed mimbo made sure people didn’t shoot first, he would look like a mimbo. His pride wasn’t worth the lives of his team.