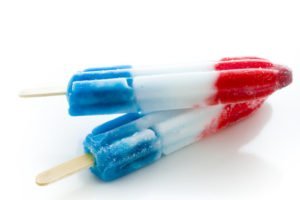 Rodney contemplated the sight before him and cocked his head to the side. He wanted to savor his treat, but it was looking a bit wet around the edges and he didn’t want to waste it.

Licking up the length, he savored the taste as it exploded on his tongue before he slurped the tip of his treat into his mouth. The wet goodness made him hum and he swallowed the juices he had gathered. Pulling his mouth off the tip, Rodney went back to licking up the sides, cleaning up the dribbles.

Shifting slightly, he went to the base of his treat and licked up and around the curve, ignoring the moan that John let loose. His friend wasn’t going to stop him from his current activity and if the Colonel tired, he would regret it.

The wet was spreading and a bit of it ran over his lips and he let his treat slip out of his mouth with a lewd pop and curled his tongue over his lips to gather the liquid. As he did, he eyed his treat and tried to figure out how he wanted to deal with it next. Drawing in a deep breath, he opening his mouth wide and drew it in and sucked on it, hollowing his cheeks with the effort.

“Damn it McKay! You are the worst sort of tease!” Sheppard drew in a deep breath and shifted as he drew up the length of his treat. “Why are you doing this?”

Rodney flicked his eyes up and stared at his friend before he drew another breath in through his nose and pulled up. The slurp was as loud as he could make it and he hummed. Pulling off he shook his head before he started licking the whole thing all over.

He was ignoring how hard John was panting. His treat was oozing liquid he had to chase after it, cleaning it all up. As he sucked it in again, he heard the long, low moan from John that he had been angling for. He could see the Colonel tensing as he came and Rodney suppressed a smirk.

Swallowing, he pulled the homemade rocket pop out of his mouth and nipped off the tip as he stared at his lover. Clearing his mouth, he smiled at John before licking the length of the pop. “How are you doing John?”

Bright green eyes stared at him, warm with lust and temper. “I came in my pants, Rodney. Because you were sucking on a popsicle like it was a cock. How do you think I’m doing?”

“I think you bet me that I couldn’t make you come without touching you. And I did. That means I get the forfeit of my choice,” Rodney told his lover with a wicked smirk curling his lips. He hadn’t stopped licking and sucking at his rocket pop and John was starting to shift again.

“And what is the forfeit you are demanding?” John asked, eyes intent.

“As soon as I finish this, I want you to fuck me until I come all over myself,” Rodney admitted.

“Better hurry then,” John told him.

Rodney smiled and slurped his treat into his mouth again and taking a bite. Yeah, he was going to get this thing finished soon. He had a better treat in mind.