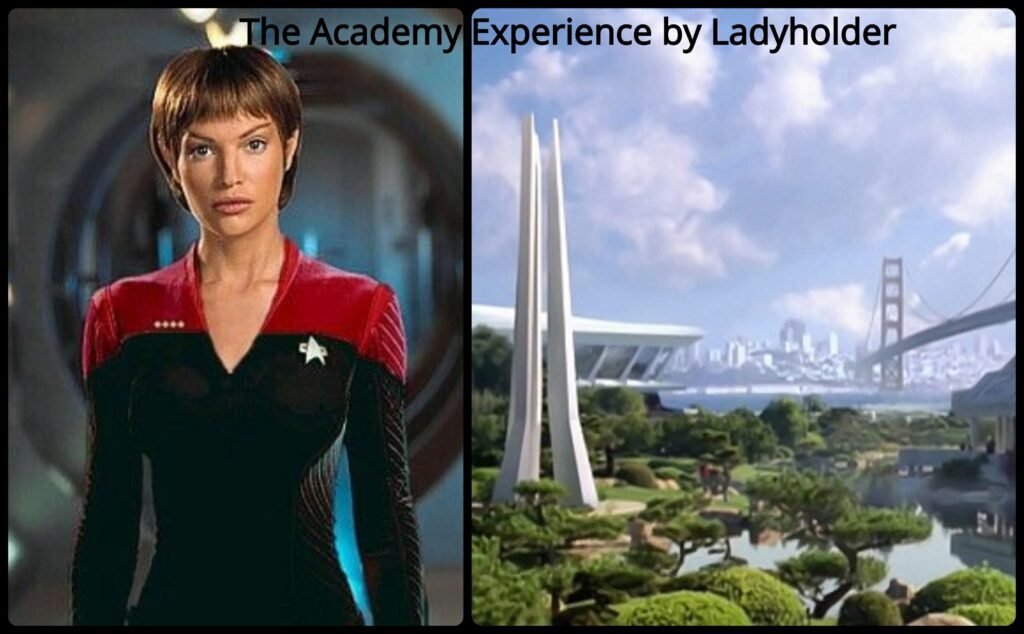 “Please,” T’Pol confirmed. When the cup of hot green tea was placed before her, she carefully picked it up. A small sip drew please come from her. “This is the new picking from China?”

“It is,” Hoshi she smiled at how perceptive she was. “This batch has been carefully mixed with jasmine flowers.”

“I would like to get the name of it so I can order some for later,” T’Pol requested. She took a second sip and nodded. “Most excellent.”

“You didn’t invite yourself over for my tea chest, old friend,” Hoshi observed. “What can I do for you?”

“Have you seen the student list?” T’Pol asked voice neutral. “We are getting some interesting students for this class.”

“I do,” T’Pol took a deep breath. “He will be the first Vulcan to actually go through the whole Academy experience. The next several years promise to be very entertaining.”

Hoshi shook her head just once before she laughed. “We’ve utterly corrupted you.”

“I have learned to appreciate a certain amount of schadenfreude,” T’Pol confirmed.

“Indeed,” though she took a sip of her own tea. “Who do you think will break first?

“The instructors,” T’Pol said after several moments thought. “Spock was offered a place in the VSA. He is quite used to being on display. He will ignore the curiosity of others.”

“If he was offered the VSA that means he’s intelligent though,” Hoshi mused. “He’s going to make the instructors work for his respect. Are you going to hold your class?”

“Yes, I believe I should,” T’Pol agreed. “There are several other students who had benefit from it as well.”

Hoshi held her cup out to T’Pol and she touched hers to it. “To an entertaining four years.”

Watching the newest members of Starfleet walk into her classroom T’Pol easily suppressed a smile at how young and uncertain they all looked. It had been decades since she had been that new but she easily remembered her hesitation at entering new situations. It had been harder when she had boarded the Enterprise and had been immersed in such an alien environment

“Be seated,” she called. Her voice had been picked up by the sound system that Malcolm had designed for her when she had first started teaching. Starfleet had eventually copied it and placed it in all the classrooms but she had the original. Turning slightly, she faced half the class.

“I am Captain T’Pol. In my lifetime I held the rank of sub-commander in the Vulcan security forces before transferring to Starfleet where I was given the rank of commander. I held that rank for over 20 years before accepting a promotion to captain. When I did, I came here to teach at the Academy. You will be my fortieth class.”

She turned to look at the other half of the class. “This class is to give you the knowledge of those who have gone before you. Starfleet is predominantly human and for those of us who are not, it can be confusing. This class is designed to give you the tools you need to both thrive and excel and the new environment you’ve chosen for yourself. While the Academy is not in the habit of setting new students up to fail it does not always recognize when a student from a non-human culture is struggling.”

The looks she was getting from the children were all severe. They were trying so very hard to be adult and confident that she didn’t have the heart to tell them they are missing the point entirely. They would learn.

“Captain T’Pol,” Spock raised his hand as the customs sheet she had given them instructed. “How do I put forth the request that I not be touched?”

T’Pol tilted her head to the side and considered that. “Other than for cultural reasons, why?”

“Like many of the House of Surak, I am a touch telepath,” Spock admitted. “I am receiving unwilling knowledge of my fellow students when they touch me.”

“Ah,” she had thought that might be the case. “I can put out a memo to the Academy as a whole if you so desire.”

“It would be for the best,” Spock admitted.

“It shall be done,” T’Pol promised. “Is there anyone else in need of this courtesy?” Several other hands were raised and she was unsurprised to see that they belonged to the other telepathic races in the class. “I will note that unless someone initiates the touching, you are all to be left alone. The only exception will be during an emergency if that will suffice?”

One of her Betazoid students nodded. “Yes, ma’am. We can all accept that. Humans are very mentally noisy.”

“They are indeed. Do you have anything to block that noise off to allow you to sleep?” she asked. All of her telepathic students nodded and she made a note of that. “You will not always have access to such technology. Given that, I would suggest that you look into ways to strengthen your mental shields to allow for overnight missions away from your artificial shield generators. There are several instructors here in the Academy who can assist you with this task.”

She watched as the children accessed the information on that and noted who relaxed and who didn’t. Not surprisingly, Spock was one of the ones who did not relax. Given the boy’s father, he was certain he didn’t need the shielding device to sleep.

“Now, one of the major reasons for this class it to provide a path of integration into Starfleet. We are not trying to suppress your own cultures,” T’Pol waved a hand at herself. While she wore a Starfleet uniform, it was impossible to hide that she was Vulcan. “That would be the height of illogic. But the Academy doesn’t have a xeno-cultural class for your year until the third semester you are enrolled and that is far past the time when you will need the information it contains. Hence this class.”

“So what? You’re here to help us translate Starfleet and human into Betazoid? Or Trill, Andorian or Vulcan?” one of her Betazoid students, Ensign Antara Troi, asked.

“Well then,” her Andorian student, Br’lec Shran asked. “Can you explain a word to me?”

T’Pol suppressed a smile. She had a hunch on what word he wanted to know about. If she was right, it was the same one that every student from another culture asked about when they had the chance. “I can.”

“What does the word ‘fuck’ actually mean?” Br’lec Shran asked.