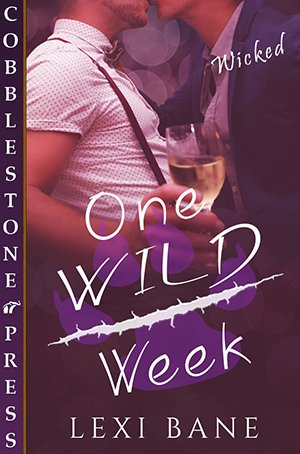 Summary: Dominic Trey had one week of leave from the Navy, and he was going to take advantage of it. He was going to dance, go hiking, and not think about the ocean for seven days. He didn’t expect to meet someone who would change his life forever. It was going to be one wild week.

The heavy beat moved through him in a rhythm that reminded him of sex. Hot, driving and relentless in all the best of ways. He moved with the beat, enjoying the grind of the bodies around him as they kicked his libido into overdrive. The ache centered at his dick, and he threw his head back and moaned.

The ache was delicious, but he kept dancing. He was getting rubbed against and was rubbing against others. The hot, tight bodies moving with the beat, pushed the heat in his belly to a lovely burn. It wasn’t enough to push him over into an orgasm, yet, but he was edging closer with every minute he danced.

When large hands cupped his hips and pulled him back against a hard body, he stiffened before he relaxed. His new partner was moving with him and not trying to get handsy with him. Dom added an extra shimmy to his dancing in appreciation for their manners. Whomever it was he was dancing with, they were just about his height, well built, and really interested in sniffing his neck.

Werewolf, he deduced. As he danced, Dom wondered if his partner would be interested in some no-strings fun. He had taken wolves to his bed before, and both of them had gone away satisfied. Sore, in his case, but satisfied.

From the firm grip his partner had on him, Dom was sure he was enjoying his moves. Swinging his hips in a circle, he brushed his ass against the other man’s front. There was a distinct bulge, and Dom licked his lips in anticipation of something spectacular.

Turning around took a bit of doing, but it was well worth the effort. His partner looked like a sun-kissed Viking. He had slightly shaggy blond hair, a bronze complexion, and wolf-blue eyes, all offset by a golden beard that framed an extremely kissable mouth. He was just a hair shorter than Dom and had muscles that looked like they came from use, not a gym.

“Wow,” Dom muttered as his cock jumped in his pants. He had been right; the other man was spectacular. And he had offset his glory with leather pants, combat boots, and a tank top in the same color as his eyes.

“Wow back,” his partner called over the music. He ran an admiring eye over Dom and licked his lips.

Dom preened slightly. He had taken special care while getting dressed. Tight jeans, an even tighter T-shirt, and hiking boots completed his outfit. His phone was tucked into one of the front pockets of his jeans, and in the other pocket was a single credit card, his room key, and ID. The rest of what he wanted he could pick up on the way to his hotel.

“I’m Dom,” he said as he looped arms around the other man’s neck.

The position pulled him closer to his dance partner, and he grinned at the low growl that he felt more than heard as his partner held him close.

“Matteus,” the were said before changing his grip on Dom’s hips to pull him closer. “Are you looking for anything? Or just dancing?”

“Well, when I got here, I thought I was just going to be dancing,” Dom called as he relaxed into the were’s hold.

He smiled, warm and lusty, at the man holding him. “Now, I’m considering something else entirely.”

The grin that crossed the Matteus’ face was blinding. “Can I talk you into a bit of one-on-one dancing?”

Dom’s hips jerked at the thought of one-on-one time with the man before him. “Gonna eat me up, Mister Big, Bad Wolf?”

Matteus’ grin got a bit sharper before he leaned forward. “I sure will.”

By will alone, he kept the moan that rose in his chest behind his teeth. “I’m done dancing.”

“So am I,” Matteus said before linking hands with him and pulling them out of the crush.

“I have a hotel room,” Dom said, voice pitched only to reach the were’s ears.

“Excellent,” Matteus called over his shoulder. He didn’t say anything else until they left the club, and then he leaned forward to murmur in Dom’s ear. “Do you have lube in this hotel room of yours?”

Dearest gods, but his voice was temptation itself, Dom thought before he processed what was asked of him. “We’ll need to stop and get some. Like I said, I hadn’t gone out with the intention of bringing anyone home with me, so we’ll need supplies. Lube is a given. Condoms?”

Matteus shrugged once. “Eh. I’m a wolf, so there’s not really anything that we can give each other.”

“Cool. Most of my lovers have been human, so condoms are a strict requirement when I’m with them,” Dom told him with a smile. “If you’re comfortable with them, I’d like to have them.”

“They’re good for minimizing messes,” Matteus acknowledged. “And there are some were safe ones on the market that can take an alpha’s knot.”

“Yup,” Matteus confirmed before flagging down a cab.

The cab made one stop on the way to his hotel, and Dom used the time in the drug store to buy condoms and lube, plus some water. He fully expected to need it.

When he got back to the cab, he noticed that Matteus was mostly keeping his hands to himself. If Dom hadn’t seen the way his eyes had dilated when he had reentered the cab, he would have worried the were had lost interest.

When they reached their destination, Dom took another look at his hotel and shrugged. His hotel was decent, but not spectacular. He hadn’t made plans to stay longer than the weekend, but if things turned out, he was willing to change those plans.

When the door to his hotel room closed, Dom turned to look at Matteus. “If you’ve changed…”

He didn’t get any further before he was pushed against the door and kissed. It was hot, just the right amount of wet, and relit the fires of his libido. Dom dropped the bag of supplies to wrap himself around Matteus and held on for dear life.

When Matteus pulled away, Dom opened his eyes, surprised that he had let them close. Bright blue eyes stared at him, and he could see the wolf was close to the surface.

“I haven’t changed my mind. As a matter of fact, I want you more now than I did on the dance floor.”

“Oh, thank all the little gods,” Dom muttered. “How do you want me?”

“In as many ways as I can get away with,” Matteus told him, eyeing him hungrily. “How long do we have?”

“The weekend,” Dom said as he gave into the urge to move. His hips rolled and brushed the length of his cock against the one pressing against his. He actually had the week, but he didn’t want to be too greedy. Not unless he got some clue that Matteus was interested in more than a fling.

“That might be enough time to get started,” Matteus told him before hitching him up.

Dom wrapped his legs around his lover’s hips and held on as Matteus carried him to the bed. Matteus was moving him around easily and it was deeply exciting. “Do you want to fuck me?”

“Yes. I have since I saw you dancing.”

Dom pulled his soon-to-be-lover over the top of him. “Good. Because that’s what I want.”

The grin that crossed Matteus’ face was filthy, and Dom shivered in anticipation.

Dom reached up and kissed the other man briefly before pulling back. “Then we need to get very naked. Now.”

“Works for me,” Matteus confirmed before sliding off the bed to start stripping.