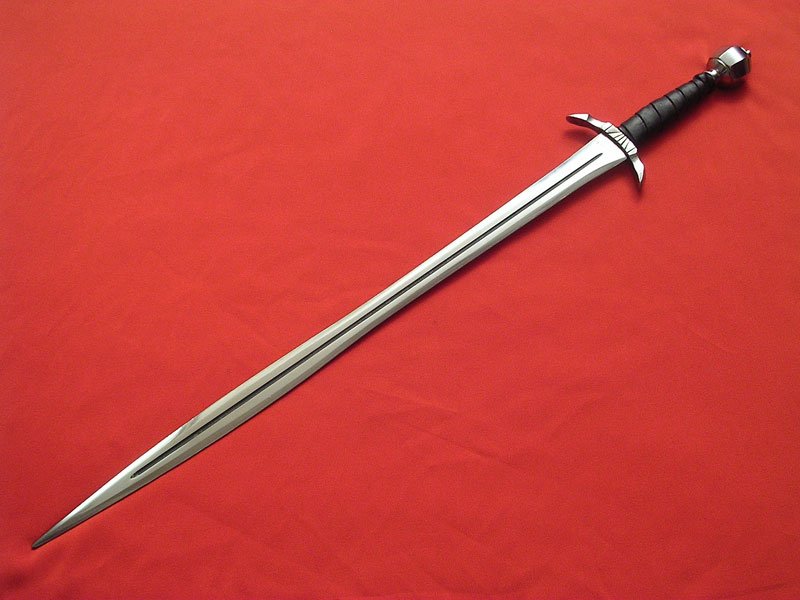 Draco crouched on the floor with his sword held out before him. He kept his eyes on his opponent. “You aren’t going to get him, father.”

“The Dark Lord demands Potter be presented to him,” Lucius told him, a mad gleam in his eye.

“No,” Draco said calmly. He didn’t feel calm, but then he rarely did around his father.

“If you won’t give him over, I will have to kill you,” his father warned.

The smile that stretched his lips was without humor and Draco knew his eyes were gleaming with a feral edge. “You can try.”

As his father worked up his nerve, Draco let his magic loose. His wand was safe in his dimensional store, so he directed it down the blade of his sword. The licks of green fire danced before him and as his magic hit the ground, his father attacked.

Once upon a time, his father had been a decent swordsman. Now with Voldemort entrenched in his magical core, he was just pathetic. All the grace and finesse a magical swordsman normally displayed were gone and what was left was a badly directed puppet.

“Give up, father. You won’t win,” Draco taunted as he blocked a wild swing from his father’s sword.

“Why do you fight for him?” Lucius panted as he tried a lunge. Draco moved out of the way before slashing at the older man’s ribs.

“I fight for him because it is the right thing to do,” Draco declared. He was drawing in deep breaths and slowly powering up a shield around Potter. He didn’t want to let his father know about it, so he had to do it slowly and carefully, making certain not to flash it into existence. He was sure Lucius would attack if he thought he had an advantage. Keeping his father’s attention on him was paramount.

“The right thing? You are a fool. The Dark Lord is power and that is the only right in the world,” Lucius sneered.

He managed to twist his sword around and pulled it back to take his father’s head off. Draco kept an eye on the corpse as he stepped forward to nudge the head away from the body. “The Dark Lord’s power didn’t save you, father.”

Draco threw the rest of his magic into the shield and waited on the Malfoy Family Magic to judge him for what he had done.

The signet ring on his father’s hand shivered once before appearing in front of him, hovering in the air. The rush of Family Magic washed over him and he could feel it weighing and measuring him. The words SEMPERVERUM echoed through him and it was a vow happy to make. Being EVER TRUE was an easy thing to do.

Reaching up, Draco grabbed the family ring and slipped it on. The punch and weight of generations of magic settling staggered him. The magic lighting the edges of his sword surged and fell into a pool around him. Drawing in deep breaths he tried to ride out the changes to him, his magic and how he perceived the world.

Draco pulled his magic back, one inch at a time. The pool of magic around his feet shrank slowly until it was pulled back into his core. The effort was exhausting.

“Draco, I can’t get out to help you. Please drop the shield,” Harry demanded.

He swayed once before he dropped to one knee, using his free hand to help connect him to the earth. His sword helped to keep him upright, and he winced at the thought of using the blade in such a manner. Turning his head slightly, Draco looked at Harry through his bangs.

His lover was still unconscious. The voice he was hearing wasn’t coming from Harry, Raising his head; Draco looked around to find the source of the voice. “Draco, please, let me out!” Harry’s lips never moved.

Draco had a direction now. He took a deep breath and forced himself to his feet. His magic overflowed again and spilled down his sword. He was ignoring the change to the color of his magic Now that he was wearing the Malloy ring. Pulling the tip out of the ground, he ignored the stream of Slytherin green and silver pooling at his feet.

It was quiet for several moments before a slow clap from a single set of hands cut the air. He spun to his left and drew in a deep breath. Standing in front of him was Voldemort. Draco extended his senses to determine if the Dark Wanker was really there.

He really was and Draco pulled in another careful breath. Fuck. Dark was a really good descriptor for Voldemort. Along with rotten, slimy and an emotional aura like a cess-pit. How anyone could stand to be around him was beyond him. Even this small exposure was making him nauseous.

“Well if it isn’t the Dark Twat himself,” Draco drawled. He pulled almost everything back to throw the power at the shield around Harry. The appearance of his magic going wild might be a good distraction.

“Do you think you can stand against me, boy?” Voldemort hissed. “Your father bent to my will. You will as well. Give me Potter.”

“Delusional much, Voldemort?” Draco snarled back.

“Potter is mine,” Voldemort stated. The Dark Wanker raised his wand and the tip lit.

“Seriously, he’s not,” Draco told him. “I just made that point to Lucius and he lost his head over it.”

“I’m not your father. Reducto!” the spell left Voldemort’s wand in all its blue/white menace.

His shield formed around his sword and Draco blocked the curse with a grunt of effort. At least to himself, he had to admit the bastard was strong. “Lacarnum Inflamarae!”

Several balls of fire sprang from his sword and each were three times the size he normally achieved with his wand. Draco took advantage of the cover they provided to step back into the shield he had around Harry.

Just as he slipped into the shield Voldemort fired several spells of his own as Draco’s fireballs burned against his own shield. Stalemate for however long he could keep the shield up. Draco wasn’t certain how long that would be, even with Family magics giving him a boost.

Voldemort smiled and started firing spells against him and Draco moved his sword to support the shield at each impact point. He couldn’t take his attention of the monster in front of him to wake Harry up. All he had to hope for was that that damned Gryffindor will kicked on soon. “Harry, wake the fuck up!”

Potter let at a low moan before stilling. Draco nodded once before flicking his wand cut of his dimensional store. He kept his eyes on Voldemort as the Dark Lord blocked or avoided all his spells while firing his own back. Draco didn’t have the luxury being able to move and the extended battle was draining him to the dregs.

His shield barely stopped the last volley from Voldemort and Draco reached for the last spell he had. All he wanted was to get rid of the Dark Wanker. Severus had better have taught him right. “Sectumsempra!”

Twin bolts of the spell left his wand and the sword he was still gripping. Voldemort managed to avoid one bolt, but the second caught him broadside. He could see the wound but there seemed to be no blood. Whatever damage Draco had done seemed to have done the trick. “You will pay for that,” Voldemort hissed before port-keying out.

Draco sagged around his bones before he folded his sword back into his store. Using his wand, he checked the area and found there were no other life signs. He was tempted to use the last of his energy to port-key them out, but with Lucius’s body there and the Family ring on his finger, leaving was out of the question.

It took everything he had left to form a Patronus and send it out. He could only hope the person he had sent it out to would listen. With the last of his energy spent, he sat down and stared blankly at the space before him.

The sound of several bodies apparating in pulled his decreasing attention back to the present. Blinking several times he saw the person he had sent for that one. “Oh. You came.”

“I did. Lord Malfoy, can you take down the shield so we can help?” Madame Bones asked.

“Uhm,” Draco focused on the shield, eyes going on and out of focus. “If I do that, I’m gonna pass out.”

The look Bones gave him was complex and Draco didn’t have the energy to parse it. “We’ll keep you safe.”

Draco had to trust that the Head Auror would do just that. That she would keep Harry safe too. He didn’t want to wake upon Azkaban like Sirius had. Pulling in a deep breath, Draco ended the shield. He stared at Bones for several seconds before the world rushed in and he passed out.

“Wake up Malfoy,” the caustic voice of Harry Potter cut through the haze of blessed unconsciousness.

“Do I have to?” Draco muttered into his pillow.

He could almost see the flat green stare that comment got him. “Yes, you do. Bones is going to be coming back to question you on what happened.”

“Oh, bugger,” Draco moaned. Stretching he worked the kinks of his sleep out of his back. “Why are you upset?”

Harry hissed at him and Draco smiled. “Because you exhausted yourself. Right to the dregs, Draco. Any longer and you could have injured yourself.”

“There is that,” Harry allowed.