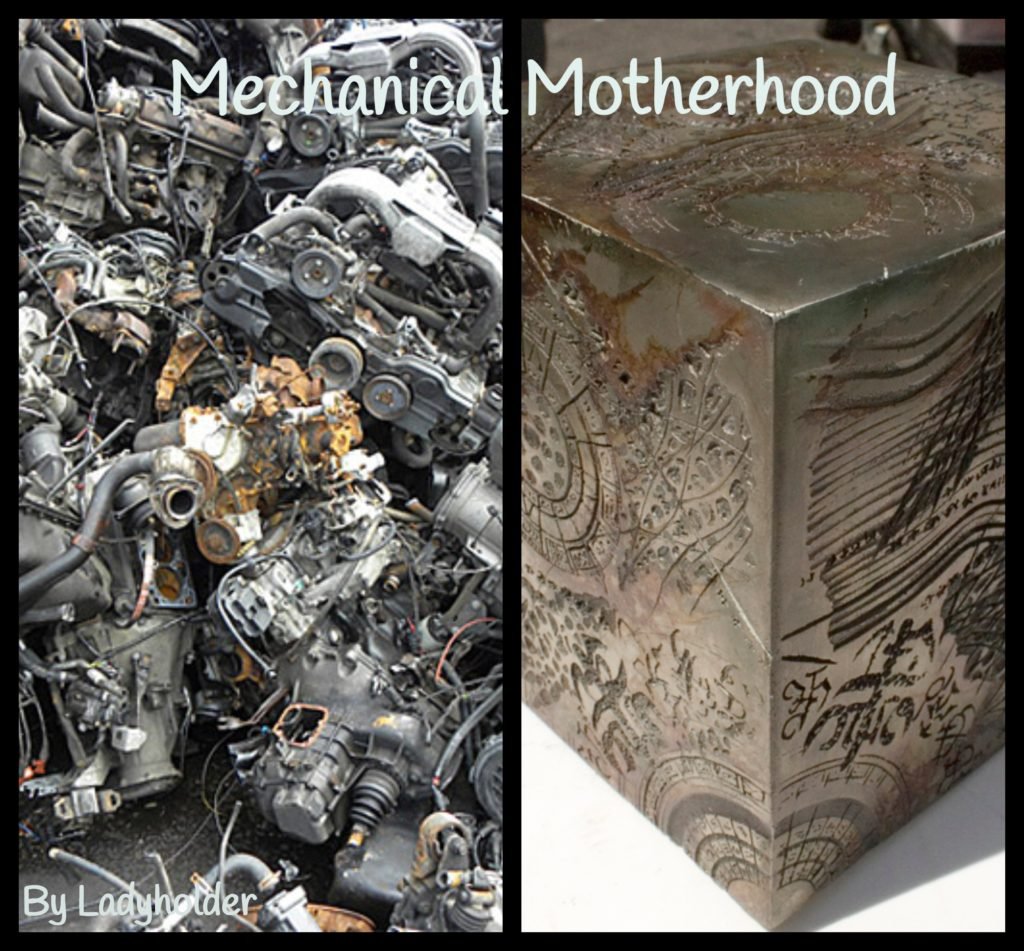 Wheeljack looked over at the human who had been working with them since they had recovered the Allspark. “Doing?”

“Yeah, he’s been working on that pile of scrap for the last three days and I was wondering why?” Lennox asked, waving at the scene before them.

“He’s rebuilding Ratchet,” Wheeljack admitted before taking another bite of the metal in his hand.

Lennox glanced over at him, eyes sharp. “Say what?”

“You get that we’re machines, right?” Wheeljack reminded the squishy being beside him.

“But you are also alive and have personalities and what we would consider a soul,” Lennox said.

“Be that as it may, it’s the machine part that’s the important bit in this case,” Wheeljack told him with a sigh. He took another bite of copper and chewed it thoroughly. Swallowing, he directed the metal to the correct spot in his internal works. “When Ratchet was destroyed, he bootstrapped himself into Optimus and was stored in his memory until we had a chance to rebuild him.”

“So all the ‘Bots that died can be rebuilt?” Lennox asked.

“Only the ones that managed to get ‘booted into Optimus,” Wheeljack confirmed. He waved his hand at the massive junkyard they had set up camp in. “That’s why we’re here. There’re enough supplies here to rebuild all the ‘Bots that were destroyed in the last few battles and maybe a few more besides.”

“What do you mean ‘a few more’?” Lennox pressed. “And why are you eating metal? I thought you guys ate energon?”

“Oh, we do. But there are reasons why I’m with Optimus. One of the things that I can do is convert most metals into forms usable to repair our bodies. And Ratchet needs a lot of things,” Wheeljack shared. He let his head tilt as he gazed at the Prime. The spine wire he was producing was just about ready. The copper had been the last bit needed to tie the whole thing together. “Don’t freak out when we get to some of the interesting bits.”

“I won’t freak out, but thank you for the warning,” Lennox said. “Can I ask what you mean on ‘why you are with Optimus’? Is the ‘with’ the same as it is for humans?”

“Finally found your curiosity on that?” Wheeljack asked amused. “We don’t fuck, Lennox. We’re not built like you on that. At any rate, those of us that you met originally came from Cybertron. We were gathered together by the ‘Bot who would become Optimus Prime as friends and potentially more. When he ascended to the position of Prime, we became both his protection and his mates. That’s part of what’s got Megatron’s wiring in a kink. He didn’t measure up and we let him know it.”

“Gee, I wonder why?” Lennox shot him a sharp look a moment later. “Mates? Man, we have missed a lot, haven’t we?”

Wheeljack laughed softly. “We’re not human, Lennox. Mate is the best term we can translate what we are. Our species reproduces in ways that are vastly different than you. Primes are the ones who design and generate the code that will form new life based off themselves and their mates. They can store thousands of individual code strings until they can bring them out and place them in a form. And that’s what was happening on Cybertron on a regular basis. Optimus was the last Prime to ascend to that level before everything went to shit. He never got the chance to bring the kids he has stored to life and they’ve lived in his memory all this time.”

“So because of what he is, he’s able to hold and create your type of life, so when things went south in battle, the ‘Bots that were able to, ported themselves into the same place where Optimus’ kids are stored? Does that mean he’s pregnant?” Lennox offered. “Is what he does a form of mechanical motherhood?”

Wheeljack connected to the internet and ran the term against the search engine Bumblebee had introduced them to. The explanation for ‘pregnant’ poured into his databases and he started to laugh. There was no way that his mate could carry a ‘Bot from creation to waking like that. “Only technically,” he said with a chortle.

Optimus waved at him and he got a burst of data requesting the spine wire with the warning that he would need nerve wire soon. He sent his mate a reassurance that he had that covered. Affection moved across their private network and Wheeljack pushed his own down the way. Releasing the clamps holding his internal manufacturing plant in place, he reached in and pulled the spine wire free. It glowed and sparkled with the metals and minerals that he had woven into it.

“Ratchet’s spine,” Wheeljack said over his shoulder as he passed the mass over to Optimus. He glanced at the body and nodded. The physical housing for Ratchet’s mind was in place and just waiting for power. He watched as the clever fingers of his mate connected everything, one super fine wire at a time. “It takes some serious hardware to get us moving.”

“Ratchet’s spine? You weren’t kidding. Okay, so what do we need to do to help?” Lennox asked as he walked forward, feet moving carefully over the masses of junk surrounding Ratchet’s rebirth cradle.

“We’ve got most of what we need here,” Wheeljack admitted. “When Optimus can talk again, we’ll see if there is anything he wants or needs us to fetch. I’ve got a supply of the rarer elements already but depending on how many he draws out, more may be needed.”

“Why can’t he talk?” Lennox asked as he leaned against a tower of crushed cars.

Wheeljack glanced at the tower and checked it for stability before turning back to Optimus. “He’s using too much memory maintaining the kids and everyone else to be able to project audible speech when he can use our network. The ‘Bots like Ratchet take up much more space…”

“Because they’ve lived longer and have much bigger personalities,” Lennox offered when Wheeljack trailed off.

“Yes,” Wheeljack confirmed. He had the nerve wire ready and passed on the first bundle to Optimus.

They worked in silence for several hours and Lennox stayed close. Several of the other humans came by as well and Wheeljack could hear Lennox explaining what was happening. Most of the hard work had been done and Optimus’ project was starting to look like Ratchet as he had last seen him. “He’s gonna need a paint job,” Wheeljack mused.

Optimus glanced up at him and nodded once. His mate seemed amused at his words.

“We can easily do that,” Lennox offered. “In any configuration that he wants.”

“I want yellow with red stripes,” Ratchet cut in, voice tired. “Also, damn. Optimus needs to get more of us out of him. It’s crowded in there.”

Laughing softly at the irrepressible force that was his friend, Wheeljack nodded. “We’ve got the time.”