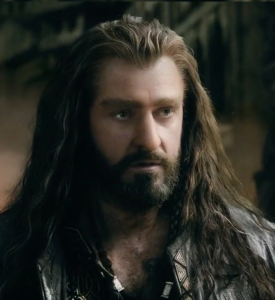 Thorin woke with a start, a shout of warning dying on his lips as he took in the bars of his cell. He wasn’t on Raven Hill. He wasn’t dead. It had all been a dream. But it had been so real. Rubbing his hand against his chest where he had been stabbed in his dream, he took a deep breath.

Mahal’s beard. If his dream was a look at what was to come, he was going to need all the help he could get to hold onto his sanity and his life. There was no way he was willing to lose his sister’s sons to Azog or Bolg in an insane effort to turn the tide of battle. He was also not going to give in to the curse of his line and let the lure of gold lead him to threatening his burglars life for doing what was right.

Settling into the darkest corner of his cell, Thorn tried to figure out how he was going to adjust his plans. So much needed to be changed due to everything he had seen. His pride was not more important than the lives of his Company.

Hours later an elf passed by and dropped a trencher of food off. Meat, bread, cheese and water, it was all plain fare. Instead of ignoring it as he had in his dream, he ate roughly half and put the rest to the side for Bilbo. He wasn’t going to try and live on his pride this time. Now that he had food in his belly he needed to plan and sleep.

The hissed sound of his name cut through the edges of his thoughts and Thorin woke up. Opening his eyes, he saw nothing. That made him blink in surprise before the dream from Mahal came back to him. He knew what was happening. Bilbo was there but hidden due to something he held close.

“Thorin! Are you awake?” Bilbo hissed.

“Master Baggins?” Thorn asked, leaning forward. “Is that you?”

“Yes,” Bilbo hissed. “How are you? Are you being treated well?”

“As well as a dwarf can be, when held in an elf’s dungeon,” Thorin told him, eyeing the space where he thought Bilbo was. “Have you seen the rest of the Company?”

“I have,” Bilbo reported. “Everyone’s in good condition. I’ve seen them all and they are healthy. Even Dwalin and he’s growling at every elf who walks by.”

“I’m glad everyone’s in good condition. And tell Dwalin to save his strength. We won’t be staying here forever,” Thorin instructed as he sat back in relief. “Have you eaten, Master Baggins?”

Thorin knew Bilbo hadn’t been eating. His dreams told him that the hobbit was spending his time searching for their party and a way out. Instead of heaping abuse on him for not freeing himself, Thorin was going to change how he treated Bilbo and hopefully that would be a good start on making a difference. In changing that fate he had been shown.

“No…” the Hobbit’s voice sounded wistful.

“I have some food I saved,” Thorin offered, voice soft. “You can have it. I’ve been getting fed often enough for a Dwarf.”

“Are you sure?” Bilbo’s voice sounded small, hesitant and desperately hungry as he asked for confirmation.

The sound of his voice told Thorin more than anything else that things were bad for Bilbo. As far as Thorin could tell, it had only been a few days since they had been locked up by Thranduil. For the hobbit to be this hungry, he had to have been starving for longer than that. And that made him angry at himself.

There was no reply, but the food did start disappearing. He would make sure to save more food the next time he got fed, Thorin decided. Hobbits should not be thin, and his dream had shown him that skinny hobbits were sick hobbits. He couldn’t in good conscious let things continue now that he knew.

“Bilbo? In your wanderings, have you found Thranduil’s storerooms?” Thorin asked after several minutes of silence.

“I think so,” Bilbo answered after the last bile of food vanished. “But I didn’t explore them.”

“That’s okay,” Thorin soothed. “If you can, see if you can find two or three elf pouches and fill them with lembas bread. And make sure you eat at least a full square while you are filling them.”

He could almost feel the incredulous stare and Thorin only stared back. He wasn’t going to let his people starve for his pride. Not when he had the means to prevent it.

“I think I’ve seen a few of those pouches. I even know where the lembas bread is stored,” Bilbo said slowly. “I’ll do that next. But a whole square?”

“Yes, Master Baggins. You can’t say you aren’t hungry, you need the food,” Thorin murmured the command. He had to be careful that he didn’t get Bilbo’s back up on that. “Also while I’m sure you can’t get our weapons, I do want you to see if you can find us a way out.”

“I may have found that,” Bilbo admitted. “I’ll be keeping an eye on it. If I’m right, we’ll be leaving by way of a water source. Will that matter with the elf pouches?”

Thorin shook his head. “Not if they’re closed right. Elf pouches will hold anything that fits through their openings. Enough about them, have you gotten any sleep since we got here?”

“No,” Bilbo sighed, exhaustion starting to leak through.

“I only get checked up on for meals and it will be hours. Sleep, Mr. Baggins. I’ll take the watch.”

Hours later Thorin sat back and cocked his head to listen to the ultra-soft padding of the hobbits’ feet as he walked away. The sound disappeared as quickly as Bilbo did. He could only hope this small change and the others he had planned would make a difference. He wasn’t willing to die. It was his duty and his honor to live for his people and make sure that his heirs did as well.

Erebor wasn’t going to have a mad king on her throne this time. He had learned his lesson. Even if it had taken a hobbit, an orc and death itself to teach it to him.