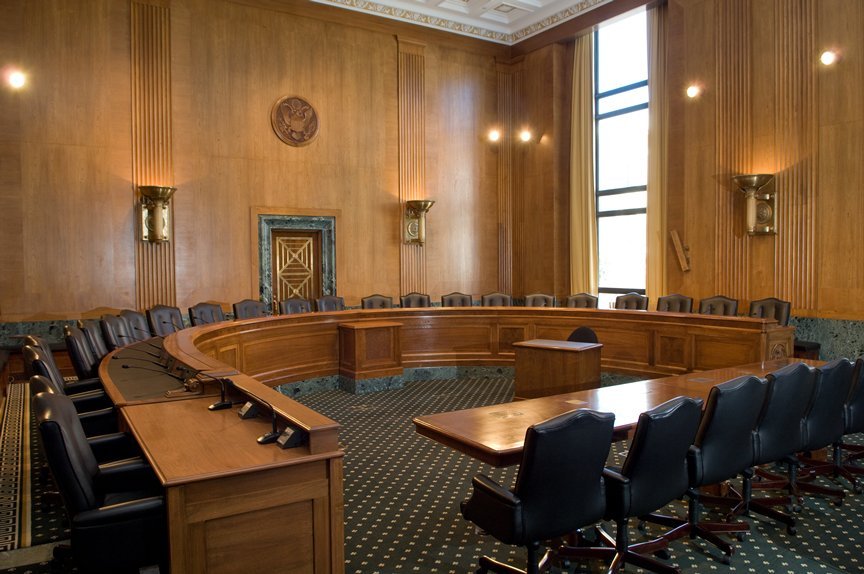 The strike of the gavel called the meeting to order and Jack tried to look as if he was happy to be there. He had a feeling that Danny would tell him that he was wearing his best unimpressed face. But then, when one had faced down the best and worst aliens the universe had to offer, a bunch of congress-critters were minor annoyances.

“This hearing is to assess the suitability of Colonel John Patrick Sheppard to be promoted to the rank of Brigadier General. General O’Neill, since Colonel Sheppard is unavailable and you are his commanding officer, it falls upon you to answer the questions this committee has,” the committee chair announced for the record with a stern look at Jack.

“Colonel Sheppard has been an exemplary officer here at the SGC.” Jack O’Neill informed the Senate subcommittee arrayed before him. “He’s been in command of our base on Atlantis for the last eleven years. He has managed to guide and protect that base through events that have influenced events here on Earth and the galaxy she resides in. Atlantis is our premier research location and the men and women stationed aboard her, have collectively advanced humanities understanding of the universe by centuries.”

“I wasn’t aware the Air Force had authorized their officers to stay in command of a base for so long.” interjected the Senator from Virginia. “I would have expected him to be transferred out after four. Why is the SGC different?”

Jack sat back slightly and raised an eyebrow at the congressman. “The SGC has an institutional habit of holding onto the military members who enter it. It takes a very certain set of traits to be able to accept that the aliens our popular sci-fi has told us about for decades actually do exist. Also, as I’m sure you are aware Senator, Atlantis is in the Pegasus galaxy. The people there are fighting a long-term war with the Wraith. One designed to keep them out of the Milky Way. Wars are not conducive to changing commanders who work midstream.”

The senator stared back and nodded “Be that as it may be, General, there have been lulls that could have allowed for handovers. Why does the SGC have a habit of marooning its officers in dead-end positions, far from Earth?”

“One, they aren’t marooned, we do have ways of facilitating personal transfers. This happens regularly and every member of the armed forces assigned to Atlantis is aware they can take assignments away from it. Two, Colonel Sheppard is the SGC’s number one ATA carrier. His posting on Atlantis was originally due to that and it continues due to his insistence that he wants to stay. Despite repeated offers to rotate back to the SGC, our fleet of space ships and the bases we have on various planets,” Jack blandly conveyed to the men and women staring at him.

All of which was true. But the real truth was, Sheppard didn’t want to come home. The man had flat out told him, the last time he and Danny had visited the city that unless he was dead, the chances of anyone getting him out of Atlantis were basically nil. Jack figured he’d have a better chance of bench pressing an al’kesh than removing Sheppard from the Ancient City.

“So, he’s stationed out there due to his genetics?” the newest senator from California asked.

“Isn’t that rather discriminatory?” the Senator pressed.

Jack suppressed the need to roll his eyes at the stupid. “Senator, Colonel Sheppard is ATA positive. Without him and the men and women like him, living on Atlantis would be almost impossible. They are the ones who initialize all the equipment on the city, interact with the city and make sure that it can keep running in as safe manner as possible. Due to them, our non-ATA people can use both Earth-based and Ancient equipment. Also, in the case of an emergency, our ATA positive personnel can fly Atlantis off their current planet. So, while it’s true Sheppard started out at Atlantis due to his DNA, he’s there now due to his competency. There is no discrimination.”

“Isolating someone due to their genetics is discrimination, General,” the senator returned tartly.

Jack did roll his eyes then. “Colonel Sheppard has stated that he is happy with his job, Senator. And he does come back to Earth on a yearly basis. At any rate, Sheppard knows that he can come back to Earth any time he wants and get a duty station that would make most officers weep with envy. He just doesn’t want to.”

The senator from Virginia jumped in again before they could go further off target. “In the eleven years that Colonel Sheppard has been in command, he’s lost forty-three members of his command and thirty-eight civilians. That’s doesn’t count the injuries, General. Some would say that is too high a number. Like he’s careless with the lives of the men and women under his command. What do you have to say about that?”

“I would say that that person has never served on active duty in a warzone where even your home base can kill you if you aren’t careful. There comes a point in every command where you, as the person in command, have done all you can to minimize risk. But wars are risky and Colonel Sheppard understands that. Currently, there are seven hundred military members stationed at Atlantis with two thousand civilians,” Jack took a deep breath and pressed on. “Those figures you quoted are from the first five years of the expedition. Over the last six years, there have been a total of six deaths. One, a four-man team and two civilians. The events that lead to their deaths are available for discussion and review as needed, but Colonel Sheppard has been cleared in a review by his peers.”

“That’s still a lot, General,” California told him, and Jack could see he was trying to sound stern. Jack opened his mouth to fire back at the junior senator when he got interrupted by the lone woman on the committee.

“General, before we ask you to expand on that topic, I have a question.” Jack glanced down at his notes to see what his team had to say about her. Apparently, she was from New York and actually a veteran of several recent wars. “While those deaths are far higher than any commander would ever want, I’m sure they don’t reflect the full picture of what happens on Atlantis. What was the tempo of missions during that time period? What else was happening to contribute to those numbers?”

Jack flipped his briefing packet to the relevant page and scanned the prepared notes. He owed Danny and Walter coffee and cookies for putting the thing together. “Well, Madame Senator, barring the expeditions first year, the mission tempo was as follows…”

The grilling took hours. Jack could feel his, very minimal and very bare, give a-fuck starting to fray. The only thing that kept him in his seat was that Sheppard was one of his officers and he was not going to let them take his promotion if he could help it. But that didn’t mean he was thrilled with the stupid questions.

“General, is there any way to negotiate with the Wraith? Maybe redirect them at our enemies?” the Senator from California asked out of the blue.

“No. They see us as about as intelligent as a nice roasted chicken. Something to rip apart and devour with no thought on what the chicken might have wanted.” Jack told the room, voice harsh. “And no, there’s no way I would sign off on the Wraith being redirected towards anyone. I don’t condone people being eaten as a legitimate weapon of war.”

Several hours later, the Senator from Virginia finally took control of the meeting and hammered the gavel to call the whole thing to a close. “Thank you, General. We will be getting back to you in a week.”

“Thank you, sir,” Jack said as he gathered the documents he had brought for the day. He was exhausted. All he wanted was a beer, a steak, and Danny. But first, he wanted to burn the monkey suit he was stuffed in.

If Sheppard made General after this, the man would so owe him a case of beer. The things he did for his people.