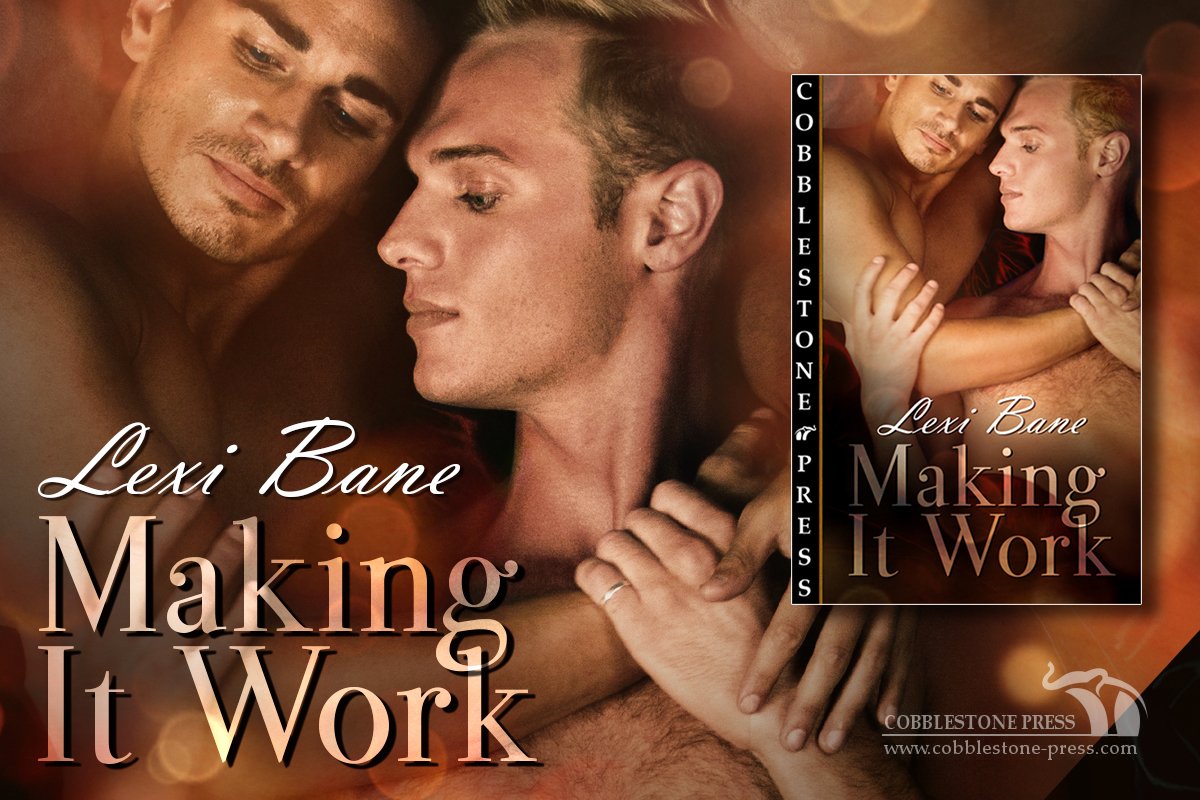 Deforest James is the epitome of a good Navy Petty Officer. His subordinates respect him, and his crewmates love him. Orders to report to a new base, however, plunge him into a race against time, and he can’t keep a lid on his feelings for his best friend, Mitch Stuart, any longer.

Deforest has lusted after Mitch for a year, and one stolen kiss before his flight leaves changes everything. Half a world apart, they struggle to overcome what countless service members have struggled with before them: making a long-distance relationship work.

“Deforest James, you’re twenty-six years old, have been in the U.S. Navy for six years and just been promoted to Petty Officer First Class as an Informations System Technician. What in the hell has you so nervous?” Deforest muttered to himself as he wandered to the bar. He’d graduated Basic Training as an E3, made it through his first two tours onboard a ship and was due to leave for a new ship in a few hours. He needed a drink, something to wash down the dread of starting over with a new command.

“Deforest, you need to relax. Otherwise, you’re going to snap.” Slightly sour breath laden with tequila and lime wafted over his shoulder, and someone pressed their unshaven cheek against his. Deforest relaxed into the other man’s body.

Deforest snorted at his best friend—and mostly unrequited crush—Mitch Stuart. They’d been at the party for an hour, and his buddy was halfway to sloshed already. “Don’t you have watch tomorrow?”

“Not until after 0800 and shift change. I’ll be fine then.” Mitch’s bony chin dug into Deforest’s shoulder with each word. They were about the same height, but Deforest was blond to his friend’s brunet, both as fit as two men in the Navy could be.

“Eh. You’ll be gone, and I’ll have to deal. Besides, the Old Man’s here too. I gave him a shot before I wandered over to your happy ass.”

Deforest made a mental note to swing by the officers’ hangout before leaving for Mitch’s place. And then, obscenely early in the morning, it was off to the airport. Changing duty stations on a holiday sucked, but he hadn’t been the one to cut his orders. That was all on the Navy. He just wasn’t looking forward to the flight from Guam to the mainland U.S.

Mitch poked Deforest hard in the side and made him flinch. Deforest turned to his friend. “What do you want, you vicious pain in the ass?”

“You wish. We’ve got six hours before your flight, and we can spend three of them drinking so stop being a grump and have some fun. I’m going to see if I can get Campbell to put on something worth dancing to.”

His friend left, and Deforest looked after the other man as he slipped through the crowd toward the DJ’s stand. Tall, lanky and a total goof, Mitch Stuart was his best friend, and Deforest was genuinely sorry to be leaving him behind, even if they would be separated only a few months.

Rubbing at the ache under his sternum and ignoring the niggle of impending loss, Deforest continued his search for a drink. He was way too sober for a Fourth of July party or for emotional reflections on relationships that might never be.

Three hours later, he was toasty, feeling no pain and dancing to the music blaring from the speakers. He’d managed to dance with Mitch twice and both times they’d gotten as handsy as they dared. Not full on groping because he had some class but a comfortable level of intimacy that heated his blood better than the alcohol he’d ingested.

Mitch headed out for a new drink while Deforest stayed to enjoy the music. His partner of the moment was one of the newer faces to arrive, and he hadn’t bothered to get her name. Someone reached through the masses and grabbed him. Deforest relaxed and let whoever pull him from the mass of bodies.

Blinking his eyes, he tried to clear the sweat blinding him. As soon as his vision cleared, he had to suppress the urge to snap to attention. Captain Vukadinovich was a damn good CO, and when they were on duty, no one was more serious. Off duty, he laughed and joked with the best of them and had accepted the nickname of “Old Man” with a great deal of grace.

“Umm. Yeah. I mean, yes, sir. It’s been a pleasure and an honor, sir.” Deforest concentrated on the man before him and ignored how the world whirled around the edges.

A pleased smile lit his former CO’s face. “Same here, James. Now go collect Stuart before he makes a bigger ass of himself than usual.”

“Yes, sir.” Deforest offered a smile of his own. Giving into impulse, he snapped a textbook-perfect salute and held it until Vukadinovich returned it. “Although I don’t think I can stop Mitch from being an ass, sir.”

“Eh. If nothing else, he’s entertaining.” Vukadinovich smiled. “Take a cab.”

“Already planned to, sir.” No way he was getting a DUI right before shipping out.

“I try, sir. Fair winds and following seas.” And with that, Deforest headed off to find his friend.

A shower and tooth-brushing later, Deforest was almost ready to head out. He had his bags, his wallet, ID, orders and tickets. He’d even splurged and bought himself an e-reader. He’d spent hours filling it with his favorite books. He was as ready for his flight as he could be.

He rubbed his towel over his hair one last time and then pulled on a t-shirt. When he was fully dressed, he stepped back into the bathroom and looked in the mirror. He’d long ago accepted that, even at his best, he looked like a surfer, rough around the edges with a bit of scruff on his cheeks. His blond hair was just on the official side of regulation, and his green eyes were bloodshot from the booze. Basically, he looked like he normally did.

“Mitch? How’re you doing, man?” Deforest called out as he walked out of Mitch’s guest bedroom. “Need me to make you some coffee?”

“I’ve got my coffee, De, but you’ve got twenty minutes before your cab gets here. Did you cancel your cell phone service?” Mitch asked as he leaned against the breakfast bar.

Deforest nodded. There was no way he was using the same cell phone contract when he arrived back in the states. Talk about taking long-distance roaming to the extreme. “I’ll see if I can get the same number, just a different area code. Who knows? I might get lucky.”

”Eh. Good luck on that. Anyway, email me,” Mitch ordered, looking at his cup, and Deforest got why. His departure was suddenly real, and the other man appeared depressed at the thought.

“I will. With my new phone member,” Deforest said. “Man, I’m not dying. I’m just going to a new duty station.”

“Well don’t die in an airline crash, De. I’m not going to be transferred for six months. You need to stay safe and don’t do anything stupid.” Mitch grunted as he shoved off the counter. He set his mug down with a sharp click before making his way to stand in front of Deforest. He planted his hands on Deforest’s hips and pulled him in close.

Deforest drew in a deep breath. Things were going to change between them—he just knew it. They’d been dancing around each other for most of a year, flirting, stolen touches and driving each other to distraction. He was hoping his luck ran true to form, and he’d get what he wanted at the last possible moment.

Deforest leaned forward slightly, pushing into his best friend’s space. “You’re the one who goes diving in water that requires antibiotics afterward. Doing who knows what underwater with tanks, wetsuits and hope.”

Honest amusement lit his friend’s eyes, and Deforest tried to memorize the blue orbs. “I know what I’m doing,” Mitch said. “You just be safe.”

“I will.” Deforest tried to think of something to say. Something to acknowledge thething moving between them. “Are we going to keep ignoring this?” he blurted out.

Mitch raised an eyebrow and huffed. “You’re an asshole, and no, I’m not. I can’t ignore it anymore.”

“Oh, thank god.” Deforest leaned forward and kissed his best friend. He desperately wanted to know what Mitch tasted like. Hot, spicy and overlain with coffee, the flavor was better than all his fantasies combined.

They kept kissing until a screaming phone broke them apart. Mitch reached back onto the counter and grabbed his cell. Deforest drew in deep breaths and tried to force his hard-on down. He wouldn’t be able to walk with most of his blood south of his belt line.