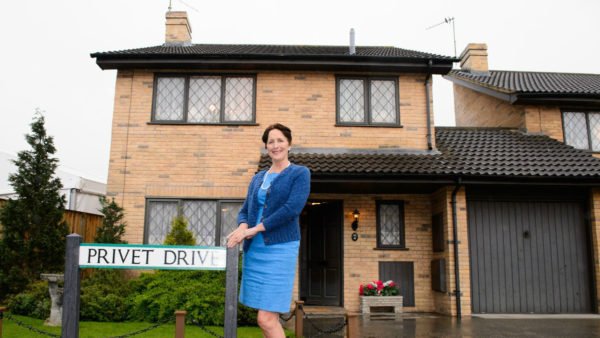 The trip to Surrey was easily arranged. Filius got a picture of the neighborhood that Harry was being hidden in and apparated just outside it. A quick disillusionment charm and he was effectively invisible to muggles. The walk to the Dursley house was quiet, but then, it was mid-afternoon and he doubted there were many people around. But better safe than sorry.

Filius was glad he had taken the time to minimize his chances at being discovered when he saw one of Albus’s pet Order of the Phoenix members curled up in a neighbors hedge in their animagus form. He had no idea who the cat was, but he could tell it was a wizard. Not Minerva then. Good to know, he thought as he walked around the front of the property. He was outside the ward that Sharprock had mentioned, but only just.

Pulling out his wand, Filius carefully tested the construct his favorite pupil had left behind. Complex, layered and fiercely loyal, the wards all but sang to him a song that reminded him of Lily Potter. Yes, these were done by her hand and as such, they might, just might let him in. After all, she had been his Apprentice for several years before her marriage to James and Lily had always believed in hedging her bets.

At the first touch of his magic, the wards pulsed once and then settled down. Filius nodded once before he worked his way to the rear of the property. He needed someplace out of sight to work.

When he made it around to the back garden, he saw young Harry. The little boy was weeding with the narrow focus of the terrified and Filius held in a growl. He needed to concentrate on his task, get the Karma blessing on the house and only then, could he work on getting the child away from his prison.

The preparations for the blessing were very simple and he managed to get everything in place within five minutes. Karma was very much a mixed blessing where you never knew how things would turn out. Filius had a good feeling about this attempt though. He wasn’t asking the gods for himself, but for a child who needed every bit of help he could get.

Raising his wand he started casting. The whisper that left his lips was almost perfectly silent, since his disillusionment charm wouldn’t cover sound. “Lord and Lady, Earth and Sky, Fire and Water, let all sit judgement on any who have wronged Hadrian James Potter, the child of my friends James and Lily Potter. Judicium quia omnia, misericordiae quia nemo.”

The spell he had agreed to with the Horde was harsh, but just. Judgement for all, mercy for none, indeed. While it might hit them, none of them could say that they weren’t complicit in what had happened to the heir of their unacknowledged Patron. But the greater majority of the Wizarding world was going to learn a lesson in Karma that would resonate the rest of the boy’s life. Filius could feel the moment when magic answered his plea and he breathed out a sigh of relief. “So mote it be.”

Spell done, he cleaned up the site of his spell work, both mundanely and magically. When there was no trace of his magic, he moved to the very edge of the wards and thrust his hand into the soil. Goblins were well suited to earth magics and Filius had taken the time to learn the craft well. Pushing his will out, he added a specific spell to the web of magic underlying 4 Privet Dr.

Sprout hated weeds and she had crafted a spell to take care of any in her greenhouses. It was easy to weave that into wards and they accepted the addition as readily as they had the blessing of Karma. All the little weeds that had been frustrating the child picking them were sucked back into the earth and turned into fertilizer for the plants that had been deliberately planted.

Filius raised his head and nodded in satisfaction. Harry was looking around, confused but seemingly happy that his chore was finished. Filius pulled his hand out of the soil and stood. He could do no more while the wards stood and Albus was controlling them. It was now a waiting game.

Trusting in the craft of Lily, Filius made his way back to his starting point. As he passed the animagus in the hedge, he saw that the man had transformed and was ducking the scolding of a passersby. Good. It seemed that the blessing was spreading.

Time to see what else they could do.