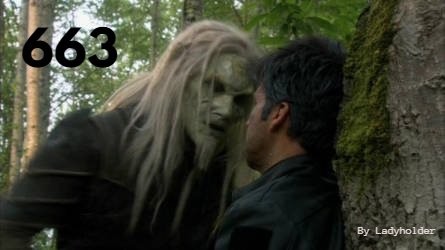 The man kicked the Wraith corpse over and dragged it to dump it in front of the stargate. Eyeing the scene in front of him, he nodded once. Everything was in place.

Tilting his head, he listened as the rest of the group hunting him blundered up the path, crunching over the sticks he’d scattered on the ground. They weren’t all that far away then. Turning to the DHD, he started plugging in a very specific address.

As soon as the wormhole flushed out, he smirked and headed around the stargate, and settled into his hide. He couldn’t see the hunting party, but he could hear them and they picked up their pace to run through the open gate, chasing ‘him’.

When the last of them went through, the gate shut down and he stayed put, waiting to see if anyone had stayed behind. When his leg threatened to cramp, he held still. Something was wrong and he didn’t have a long-range weapon that would let him kill at a distance safely.

Breathing softly, he suppressed a grunt of satisfaction as one of the soldier caste walked out of the forest and checked around the stargate. Bingo.

The urge to burst out and try to kill the damn thing was strong, but he refrained. Keeping his mind calm and his body still, he waited. The soldier caste wraith glanced around the clearing one final time before he started punching in a gate address.

Only when the damn thing had gone through did he relax and walk out of his hiding place. He eyed the gate with satisfaction. He’d managed to send another twelve through to their deaths thanks to a space gate. “663.”

It was the first time he’d managed to be alone on a planet in months. Drawing in a deep breath, he started hitting a very special address. “Here goes nothing.”

Stepping through the gate as soon as the wormhole settled, he could only hope that he was going to make it through.

Stackhouse turned to look at the stargate as it started to rotate. “Everyone back up! We have an active gate!”

“Sarge, no one is supposed to be coming through here for another twelve hours by the schedule we were given before we left Atlantis,” Brickhouse called out.

“Understood, Corporal,” Stackhouse said. His attention was on the gate and he had his gun up and ready to fire. Unknown gate activations in Pegasus were not normally friendly and he wasn’t keen on getting shot. “Everyone at the ready?”

The chorus of confirmations that came back were reassuring and he drew in a deep breath as the gate flushed with the cycle of an incoming wormhole. The puddle was still for almost ten seconds before someone stepped through.

Stackhouse stared at the man before him and swallowed twice before he lowered his weapon. “Colonel Sheppard?”

The colonel smiled at him, eyes full of pain and waved a hand at his back. “Hey, Stacks. I need to get a Wraith tracking device out of my back and then we should leave. We’ve got about an hour.”

“Sir, yes, sir!” Stackhouse confirmed. “Brickhouse, start your timer. Clayson, as soon as the wormhole dies, dial Atlantis and get the docs over here and let AR-1 know the colonel is back.”

“Yes, sir,” both men barked and turned to their tasks.

“Sir, what in the hell happened to you?” Stackhouse asked.

“The Genii and then the Wraith, Sarge,” Colonel Sheppard explained.

“Jesus Christ, John,” he heard as he woke up.

“We got the tracker out of your back, not a problem, but you reacted badly to the medications and we transported you back to Atlantis after scanning you six ways to Sunday to see if there was anything else hiding,” Rodney reported as he slipped his hand into John’s. John held tight as Rodney reported on what had happened after he’d been knocked unconscious for surgery. “We left a sensor on the planet and thirty minutes after we’d left, a single Wraith male exited the gate and checked things out. He stayed about five minutes and then left.”

“Not surprised,” John murmured. His voice sounded rough to his ear and he hummed softly in satisfaction as Rodney slipped ice chips into his mouth. “They’ve been hunting me for a while. And most of the bastards died for it too.”

“Good,” Rodney said. There was a great deal of anger buried in the word and John couldn’t blame him. He was pissed off to the max, but there was nothing he could do with his anger. Everyone who had been behind his becoming a Runner was dead.

“Any idea when I can debrief?” John asked after several minutes of companionable silence.

“Where’s Elizabeth?” John asked. He’d expected that she would have shown up as soon as it looked like he was coming out of anesthesia. For her to be missing was weird.

Rodney grimaced and huffed once in annoyance. “Back on Earth where I hope she rots.”

“Right, you missed the bullshit,” Rodney said before he squeezed John’s hand once and let it go. He started gesturing and John watched, trying to understand what he was being told. “So, when you got taken by the Genii, we asked for the authorization to search for you. That was delayed for almost an hour. We finally got it and managed to confirm the address you were gated out too. Lorne came back to get a force together and while he was doing that, the videos of you being fed on by that Wraith were being transmitted to us. Weir lost her shit and denied Lorne the authorization to take his force through.”

When Rodney paused, John bit his lip. That was not what he had expected to have happened and it hurt to know Elizabeth had fucked him over. “How did he get around that?”

“Radek and I overrode her,” Rodney said softly.

“Jesus, Rodney. You said that you never wanted to do that,” John breathed out. McKay’s position as the CSO of Atlantis meant that he was Weir’s second in command and it was a position that his friend had hated. Rodney had been very blunt about his inability to deal with politics.

“I really didn’t,” Rodney agreed. “But she was going to leave you in the hands of the Genii and that was bullshit on several levels. Not the least of which is because you’re a colonel with the SGC. The major part is, though, that we don’t leave anyone behind.”

“Then what happened?” John asked. He could feel himself flagging as his energy levels waned and his eyes got heavy.

“We got on the planet to find that you and the Wraith had killed everyone. And you were gone,” Rodney said grimly. He frowned at John. “I can wait to get the rest while you get some rest.”

“Thank you, Rodney,” John said. He was shocked at how upset he was to get confirmation of what had happened to on Atlantis.