Evil Author Day: The Ethics of Being a Sentinel

Title: The Ethics of Being a Sentinel 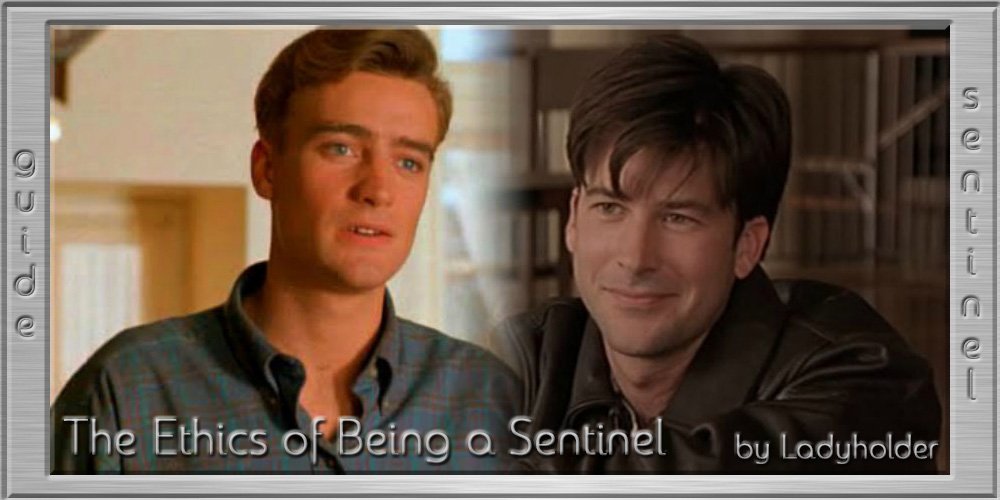 When John was away from his Guide, he made it a practice to not to overstretch his senses. He had enough control to use them, but courting a zone by being stupid was well, stupid. That didn’t mean that he was going to use them for anything he was asked for, or even ordered to. Especially when the order he was given was illegal as hell.

“Sir, what you are demanding is against the law, violates the statute between the Sentinel council and the US Military, plus it’s in violation of the UCMJ,” John ground out. He had been listening to his new commanding officer lay out his spot in his first squadron with a level of disbelief. John had no idea that anyone was able to rise to the level of the officer before him and be as prejudiced as he was.

The CO of his squadron stared at him over the length of his desk and didn’t back down. “While I may have to put up with you and your little faggot of a Guide, I won’t have any others in my squadron. I am ordering you to tell me when someone has sex with someone of their own gender. Once they’re found, they’ll be chased out of my Air Force with every bit of conviction I can muster.”

“Never going to happen. Sir,” John ignored the slur against his Guide with the skill of long practice. His CO wasn’t the first to refer to Rodney using prejudiced slurs.

“Well then, it looks like you’re going to regret that, son,” his CO sneered. Stabbing the button to his desk phone, he called for the MP’s.

Reaching down his link to his Guide, John yanked on it. He could feel the startled curiosity wake in the other man and he fed him his apprehension, irritation and frustration, plus urgency. Echoing back to him came the feelings of acknowledgment and anger from his Guide. Rodney would be standing by for a call from him.

When the MP’s arrived, John didn’t try and fight them. From the way both men’s eyes widened at the sight of his S&G badge, he was sure they were rethinking their decision to get up that day. He was very certain that they had never expected to have to arrest a sentinel. Lips twisted in a wry grin, he listened as the ‘charges’ were against him were detailed.

The two MP’s looked at him with faces that were painfully neutral. Holding his hands out he let the men slap the handcuffs around his wrists and head him off. John had decided that he was actually planning on enjoying the fallout of the mess he was currently in.

“Sir? If you could come with us, we’ll escort you to the brig,” one of the two men told him.

John nodded and started walking out. Fuck if he gave a shit about his punitive CO. From the huff of temper the man het out, he was aware. John hoped he chokes on his spleen.

Once the door to the base commander’s office was closed, the MP who had cuffed him reached for them. John shook his head. “Better leave them, Sergeant.”

Sheppard took a deep breath. “Just because I’m a sentinel, doesn’t mean you should ignore your protocols, gentlemen. Just get me to the brig and let me have a phone, please.”

Both MP’s nodded at him before slanting a look at the enlisted tech sitting as secretary. She just held up her hands and shrugged. “Whatever you do, just make sure everything’s recorded and above board. For all of your sakes.”

The two MP’s nodded and herded John out of the admin building. They were very carefully not touching him and he was amused as fuck with how nice they were being. He would even stand up for them against his Guide. It wasn’t their fault their CO was a dick bag.

The drive was silent and John took the time to center himself before carefully exiting the Car. He could feel his nose wrinkling at the smell of the building and tried to suppress the expression. Bleach, vomit, fear and piss were not smells he wanted to experience together.

”I guess it wouldn’t smell too good to a sentinel, huh, sir?” the MP who had kept quiet observed.

John slanted a glance at him and took in his name tag. Sergeant Stackhouse and his partner Markham were his escorts.

Stretching out his senses slightly, he took shook of the building and the surrounding areas. The smell of the brig was front and center, but the area around it was calm. The personnel in the building seemed to be calm as well.

“Okay.” John said after several moments. Waving his bound hands, he signaled his willingness to move. “Let’s get this show on the move.”

Getting booked sucked. The ink for his fingerprints itched and he could feel how irritated his skin was from it. His eyes ached from the camera flash and being in with the smells hadn’t improved them at all.

When he was given a phone to make his call, John paused. If he called his Guide, he was 100% certain Rodney would come down on his command like hells own missiles. While his CO deserved it, he wasn’t too sure about everyone else. He was doing okay with his senses, so he pushed off his need for his Guide and instead reached out to the next best person.

Dialing from memory, John mentally crossed his fingers. Lt. Colonel O’Neill all had just gotten a new posting and was incredibly busy. But unlike his Guide, the Sentinel normally picked up the phone, no matter who was calling.

“O’Neill,” the gruff voice of the Sentinel he considered his Alpha barked out. From the sound of things behind him, wherever he was posted was full of things that made him itch to ask questions. John had to remind himself that he wasn’t supposed to listen to the background conversations, no matter how fascinating they sounded.

“Sheppard, what have you gotten into?” O’Neill asked. The noise behind the Lt. Colonel cut off and John could hear the sound of a door being closed.

“I was reporting to my new CO when he told me that due to my status as a sentinel, I would be reporting all the DADT violations I heard. And that I would also be inspecting everyone in the command to see if they were in a same sex relationships.” John ignored the stiffening of the MP’s posture. “If I didn’t do that, he would make sure that I wasn’t able to fly ever again, I would be going to jail and he would make sure that my Guide never saw me again.”

“Well, the last is total bullshit. And as I recall, the Air Force operates under the directive of ‘Don’t Ask, Don’t tell, Don’t Harass, Don’t Pursue’. That means sending someone on a witch hunt through the ranks is a no go,” O’Neill, pointed out. “And as a sentinel, you are required to hold anything you see or hear as confidential unless it’s a clear violation of the law.”

John smiled at the muttering the other man was doing. “I said the same thing, sir. My CO stated that since DADT was the law of the land, I could earn my keep by enforcing it. And to make sure to never allow my Guide to be around him. After all, since I was a faggot, but a special one, he had to tolerate me. He didn’t have to tolerate my Guide.”

“I hate officers who think their prejudices are the only way to go,” O’Neill bitched. “Okay, kid, I’ve got a jet booked down to your base. Danny and I’ll be there in about four hours. Sit tight, be quiet and see if someone will call Rodney. Because I’m not going to.”

The snicker that burst out of his mouth was mostly involuntary and John cleared his throat and tried to bite back the chuckles. “Yes, sir.”

“You’re an asshole, Sheppard,” O’Neill’s voice was fond. “And your Guide is a class ‘A’ drama queen. I need my hearing to fly. Get someone else. Four hours.”

“Yes, sir.” John waited until the Lt. Colonel had hung up the phone to disconnect on his end. He looked over at Stackhouse and signed. The Sergeant. was sitting still and silent, face white with shock.

Clearing his throat, John tried to put as much reassurance in his voice as he could. “There is no way on this earth or any other that I will go looking for DADT violations. Nor am I going to accuse anyone of it if I happen to notice something. It’s against my oath as a Sentinel and as an officer.”

The sign of relief he heard from the man’s partner was telling. He wasn’t going to comment on the way the two smelled like each other. “Now, I know I don’t get another call, but it might be a good idea to have someone call my Guide. And the national head.”

“Understood sir. Can I get the best phone number to call them at?” Stock house asked as he pulled out a notepad to take down the phone numbers.

John pulled both up from memory and listened as the Sergeant called both. Rodney was… well, he was upset as fuck at finding out his sentinel was under arrest. John didn’t even have to extend his hearing to understand the words his Guide was letting loose. The second call was a lot calmer and from what he could tell, it was a message left with a secretary. He wasn’t too sure if he wanted to know what Blair’s response to the message was going to be. But he was sure that he was going to see the fallout of it.