The Magic of Hobbits

Title: The Magic of Hobbits
Author: Ladyholder
Big Short Prompt: Survival
Fandom: The Hobbit
Relationship: Hinted at Thorin/Bilbo. If you squint
Genre: AU
Wordcount: 1002
Summary: Bilbo survived to make it back to the Shire. Now, he has to work to make Bag End a home again.
Other Stories in the Series: Brave, Fire Cleansed, Sowing 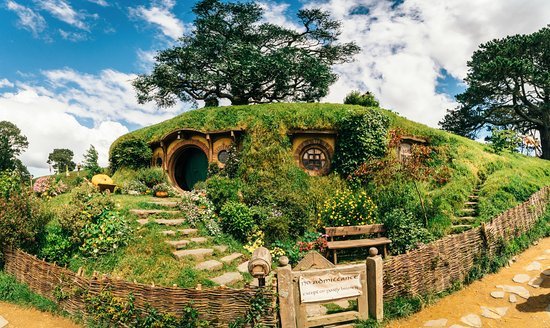 Bilbo had known not all homes were like a hobbits smial, but it was more intellect than experience telling him that. Well, until he had gone to Rivendell, had seen Beorn’s sturdy home and investigated a town of men. None of those places were like his home at all. And don’t get him started on Erebor.

The Kingdom Under the Mountain was literally under the Mountain. Hollowed out from the stone as if prized free a chunk at a time and shaped to the will of the dwarrow who lived there. All harsh lines and straight vistas, the expanses made him uncomfortable. The place felt dead, beyond even the damage that Smaug had done. And after Thorin had died, it had felt worse.

But he was back in his smial now, cradled within the embrace of his family home and Bilbo sank into it. The emptiness was worrying, but that could be fixed. Smiling slightly, Bilbo let the vindictive Took half of himself loose. Flexing his will, he pushed at the smial and asked it to retrieve all their missing possessions. Once he felt his home accept the task, he opened the door and propped it there with the troll trunk.

When his mother’s glory box walked itself back in, Bilbo turned around and started exploring. It had been almost fourteen months since he had been home and he needed to see what the hole had been up to in his absence.

The main hall was unchanged as was the parlor, the kitchen seemed to be a bit bigger with a slightly taller ceiling, and he could definitely tell the first pantry was half again bigger. Connected to both of those, his dining room was also larger. Before thirteen dwarrow, a wizard and a hobbit had been jammed cheek to jowl into the space. Now there was plenty of room for guests. Bilbo patted the wall of the room with appreciation.

Wandering down the main hallway, Bilbo tilted his head up to look at the ceiling. It was definitely taller, by at least six full inches. His bedroom was much the same, although empty of everything but dust bunnies and a small spider. The urge to squish the damn thing was strong, but he wasn’t in Mirkwood and the spider wasn’t attacking him.

Bilbo turned on his heel and kept marching down the hallway. Bag End had grown more down there too. Instead of just the back entrance to the smial and the turn in the hallway, there were several empty rooms. Each was set up like a bedroom and at the curve of the hall was a second water closet. Peeking in, he saw it was bigger than the original one that Bag End had had and he patted the wall again in thanks.

The back part of the hallway yielded the deep wine and cold storages and they were also substantially bigger. To say nothing of the expanse of room that had originally been a small storage for seasonal stuff. All those rooms were empty and he made mental note to do an inventory on them as soon as the retrieval was finished. As he came around to complete the circle of hallway that was the main walkway in the smial, Bilbo saw most of the parlor had returned along with the kitchen. The rest would return on due time.

Walking into the parlor, Bilbo reached into his pack for the three Hobbit pouches he had brought with on his grand adventure. They had been plump little things, tied to his belt when he had left and full of good food, but now they were sadly flat. That didn’t mean they were empty, no way that would happen, but they were sadly depleted.

Untying the first, he started unloading it. The food he had gotten from Rivendell was piled on the empty shelves of the front pantry and he arranged it all with care. Those victuals would be his only meals until he unkinked the mess his ‘death’ had made of his finances. If his accounts had gone to Lobelia, his grandfather the Thain was going to get his ears pinned back. When his bag was finally empty, the pantry looked much better. Not as full as a good hobbit pantry should be, but a good start nonetheless.

The second pouch contained what gold he had been willing to claim from the masses shoved at him. After. Bilbo hadn’t taken everything, but he had picked up enough to make sure his descendants would survive and prosper for generations. That pouch got placed in his bedroom.

The third pouch looked even emptier than the first two and he wasn’t planning on opening it. When he had placed his nifty ring in it, he had only done so because the pouch was safe. It had taken less than a day for the thing to try to call out for him. He had never heard of a magic ring that wanted to be worn, but that could not be a good sign. So the little trinket had stayed in the pouch and it had fallen silent. Bilbo stared at the pouch for several minutes before placing it on the mantle of the parlor fireplace. He needed to figure out what to do with that. Yes, he did.

But not right then. He had a smial to put to rights, a life to pick back up and decisions to make. Gandalf would be back by in the fall and he would ask him his opinion then. Pressing his hand against his breast bone, Bilbo rubbed at the ache there.

Yes, once he had talked to Gandalf about his ring, he would see about populating the expanded home that Bag End had become. After all, Hobbits had more secrets than how they built such large homes into such small hills. And gardens were for more than vegetables. Whistling softly, Bilbo turned away from the pouch and started directing his returning belongings to their proper places.